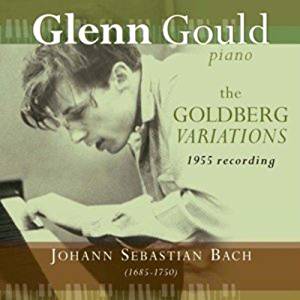 Every now and then, to refresh my soul and rejuvenate my being, I listen again to Glenn Gould playing Bach’s Goldberg Variations. It is the recording I return to more than any other and in this article I shall try to put my finger on why that is.
The Goldberg Variations are recognised as one of the great masterpieces in theme and variation form. Written in 1741 for keyboard virtuoso Johann Gottlieb Goldberg, they display an ideal combination of fantasy and rigorous pattern. After the Aria, which must be one of the most beautiful themes ever written, follow thirty variations, each colourful and characteristic, and yet each forming an essential part of the overarching whole. The danger with variation form can be that many repetitions of the same chordal pattern become dull. Nothing could be farther from the truth here; Bach dazzles us with endlessly inventive dances, canons, contrapuntal conversational music, ornamented courtly music, as well as set point deviations into the minor key to draw us into a more thoughtful, expressive world. It is all psychologically perfectly judged to make a satisfying musical experience which is Baroque and stylised, yet human and expressive.
Although this is a work of genius, it nevertheless requires a great, fearless interpreter to understand its qualities and to bring them to life. Glenn Gould identifies with the music to such an extent that he seems almost to be its living embodiment. He “becomes“ the music in the way that a great actor takes on a role and that is in large part why his interpretations of the work are so utterly involving. He seems to be talking to us through the music. Living and breathing its very essence.
Eventually Gould would eschew the concert platform in favour of the studio. His second (1981) recording of the Goldberg Variations was one of his last utterances and contains more slow playing than the carefree 1955 version, as well as more carefully worked out tempo relationships between variations. Both versions are spell-binding and in both versions I admire Gould’s understanding of how to pace a large musical structure. The exquisite logic with which he unravels the musical line enables the listener to follow the arc of phrases with absolute clarity; you cannot help but be enthralled.
Then there is the sheer range of Gould’s playing: astonishing feats of speed are dashed off with devil-may-care ease, grandiosity sits beside insouciance, complex multilayered textures are played with clarity, simplicity compels. Gould utilises editing techniques to enhance the spontaneity and colours of his playing rather than to iron out the character as so often happens during the recording process. Some of my favourite moments are when it feels as if you are overhearing someone’s private thoughts and emotions, as in the soul-searching Variation 25 Adagio which feels like eavesdropping on inner doubt and turmoil. I love the forthright rejoicing of the final variation Quodlibet – the equivalent of what we might call a mashup today – where several tunes are sung together.
Gould’s sense of style is also impeccable. Bach was writing for a harpsichord with 2 manuals (keyboards), so to render all the contrapuntal lines on a modern piano requires much dexterity, but Gould manages to sound nimble and Baroque whilst rejoicing in the extra colours and resonance the modern instrument brings to the party. He is not stylistically bound by the period of the music; he presents us with music and playing which tower above their own times and speak to us today.
After so much has happened, the repetition of the Aria at the end of the Goldberg Variations is incredibly poignant, giving the impression of someone looking back over their life. We see again the same person, hear again the same Aria but now coloured by experience. Bach wrote on the title page that this work was for “music lovers” and the “nourishment of their souls”. Without a doubt, and particularly when seen through the twentieth century prism of Gould’s profound understanding and unfettered technique, the Goldberg Variations never fail to refresh my soul.