I’m working towards a performance of the Clarinet Trio by nineteenth century musician, Louise Farrenc (1804-1875) https://www.emmajohnson.co.uk/concerts/

It’s a sparkling piece, well written for clarinet, piano and cello and dating from 1856. Revolutionary it is not – the style brings to mind Mendelssohn – but lyrical and entertaining certainly are apt descriptive words. And the reason that such a lovely piece has not been known about until recently? It was written by a woman.

Today we take it for granted that women can compose music but in Farrenc’s era this was not commonly held to be true. Influential 18th century thinkers such as Rousseau contended that boys’ and girls’ brains were different; girls were born only to run a household and were less rational than boys. Immanuel Kant praised the “beautiful virtue” of women, regarding them as the weaker, passive sex, unable to withstand the strenuous demands of creativity. These ideas took hold for a long time. As late as 1919 the composer and viola player, Rebecca Clarke, on entering her viola sonata for the Elizabeth Sprague Coolidge Competition, would find that reporters declared it inconceivable such a superb work could have been written by a woman and that its creator must have had help from a man.

Granted, women were permitted the role of performing prodigies. 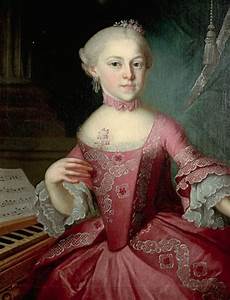 There are many examples of young female pianists, violinists and singers touring and holding their own: Nannerl Mozart (Wolfgang’s sister), for example often had top billing over her brother. Typically a young female prodigy would be showcased by an ambitious father who would accompany her on tour. However as soon as the daughter married it would have been considered highly indecorous for her to continue as a musical performer. Options after marriage included hosting a musical salon, performing in private or, for the less well-to-do, taking a teaching position. Nannerl was required to marry a local magistrate and look after his five children from previous marriages.

Marie Pleyel and Arabella Goddard were internationally rated pianists who followed this pattern, both eventually retiring to teach. Clara Schumann, however, performed into old age, in part because after her husband’s death she needed the income, but mainly because of her truly exceptional talent and strong sense of vocation. Her contemporary, Fanny Mendelssohn, (Felix’s sister), coming from a more upper class background, never received fees for playing, only flowers. Even in modern times the custom was, until quite recently, to give female classical performers flowers, as if to imply that no money had changed hands. When I was first on tour in the 1980s and 90s my own house would resemble a florists’ and in all honesty, it’s a perk of the job I rather miss!

Presumably a wife who performed was considered to reflect badly on her husband’s ability to provide. Carl Maria von Weber’s lover, the opera singer, Caroline Brandt, initially refused to marry him because it would have meant giving up her career, and even in modern times there are examples of musicians such as Dame Thea King and Dame Evelyn Barbirolli giving up playing in order to marry. I myself have also very occasionally been criticised for working whilst bringing up a daughter.

Clara Schumann helped break the mould not just for women

performers, but composers too, because, encouraged by her father and her husband, she continued occasionally to write music. However she clearly felt conflicted about this. She wrote in her diary in 1839 “I once believed that I had creative talent, but I have given up on this idea; a woman must not wish to compose – there never was one able to do it. Am I intended to be the only one? It would be arrogant to believe that.” Clara Schumann’s works are finely crafted and beautiful but she always lacked belief in their worth.

Which brings me back to Louise Farrenc, a married mother who, incredibly, defied the conventions of the nineteenth century and succeeded in making her way as a composer. A key factor in her case was her husband, the publisher Aristide

Farrenc, who recognised her talent and actively encouraged her to bring her works before the public. He could see that her pieces were exceptional and underpinned by a craft that it would have been rare for a woman to acquire. (Although forbidden to take composition classes at the Paris Conservatoire, Louise had taken private classes with its director, Anton Reicha and encouraged by her artistic parents, she worked hard so that her technique equalled that of any man). By all accounts Louise Farrenc was modest and retiring in character – not what you might expect from a revolutionary, but with the belief and backing of a supportive spouse, her talent and hard work propelled her forward. After the particularly enthusiastic reception of her nonet for strings and winds in 1849, she even requested, and was granted, pay that was equal to her male counterparts’ at the Paris Conservatoire.

In Louise Farrenc we see a precedent being set and the way forward for women composers slowly opening up. Once “female composer” was not considered a contradiction in terms, women could work at the art of composition and learn from hearing their pieces in concert. With hundreds of pieces to her name, musician Amy Beach, made considerable headway in America where composing, unlike performing, was not forbidden by her husband. Dame Ethel Smyth in the UK was the first woman to be honoured for composition, and the French composer and pedagogue Nadia Boulanger went on to exert a huge influence on musical language of the early twentieth century. These musicians still tended to be lumped into the “Women Composers” rather than “Composers” category, but since then ideas have gradually moved on, and today we accept the idea that women compose music…just…

If you are in Yorkshire in November I hope you can join me, Martin Roscoe and Raphael Wallfisch for Farrenc’s joyful Trio Op.44.

With thanks to my supportive spouse!