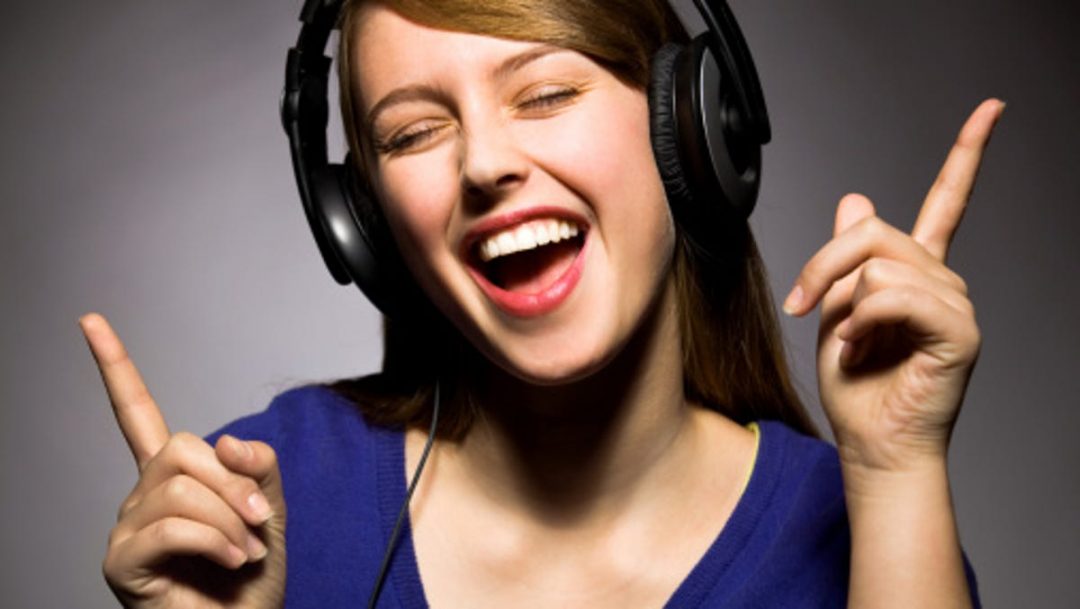 Music never ceases to astonish me. With its power to sweep listeners off their feet and make them dance, as well as its ability to affect emotions, whether rousing them for work or calming them for sleep, music is the most visceral of all the arts. Which other artform can raise congregations to spiritual heights, enable physical synchronicity in large crowds and promote social cohesion as well as providing entertainment and cultural experience beyond words? Music should not be taken for granted. It is too often labelled a non-essential subject in our schools but, politicians, please take note: music is an elemental force for good.

A few years ago, I received an email from someone whose mother had been in a car accident and was in hospital in a coma. The patient had made no response to verbal questions from her carers, so they had decided to try playing her some music. My Mozart Clarinet Concerto recording had been a favourite of hers before the accident, so they played the slow movement; to everyone’s surprise she responded and opened her eyes.

Music’s power to unlock the body has always been a source of wonder. Its mechanism is still not fully understood but

scientists are getting closer: “Humans have a natural predisposition to respond physically and emotionally to music — it is almost as though we are ‘hardwired’ to respond to it,” says sports psychologist Costas Karageorghis Ph.D., author of Applying Music in Exercise and Sport. “Music stimulates the part of the brain responsible for regulating wakefulness (the ascending reticular activating system) which energizes us and makes us want to move” he explains.

Music therapist Brian Harris advises stroke survivors to practise walking to music because it helps regularise their gait and improves the speed, symmetry and length of each stride. This effect is caused by what is known as ‘entrainment’, the simultaneous activation of neurons from different parts of the brain which is brought about by synchronising yourself to music. It has also been found by music therapists that stroke survivors can gain control of their face and tongue muscles more quickly by attempting to sing, even when they still lack the ability to talk, thereby encouraging entrainment and faster recovery.

Many runners listen to music as they run and not just because it is enjoyable, it’s also an effective part of their kit. The right choice of music can make a runner go on for longer and also increase their speed. “When movement is synchronized to music, the body becomes more energy efficient,” Karageorghis explains. “And that, in turn, can have a profound effect on endurance.”

To have an effect on your running speed, music needs to be fast paced – 120 bpm and above. If you train to progressively faster music tracks, it can even help you achieve that elusive PB as you will gradually achieve a quicker step cadence. For music to work in this way, it also needs to be loud, to rouse you, and get you training beyond your comfort zone. Slow, quiet music is not going to have the same effect but should be saved for the cool down at the end of the workout when it will really help relax you and get you back down to a baseline heart rate much more quickly.

Music doesn’t only activate our motoric systems; it also can unlock emotion. 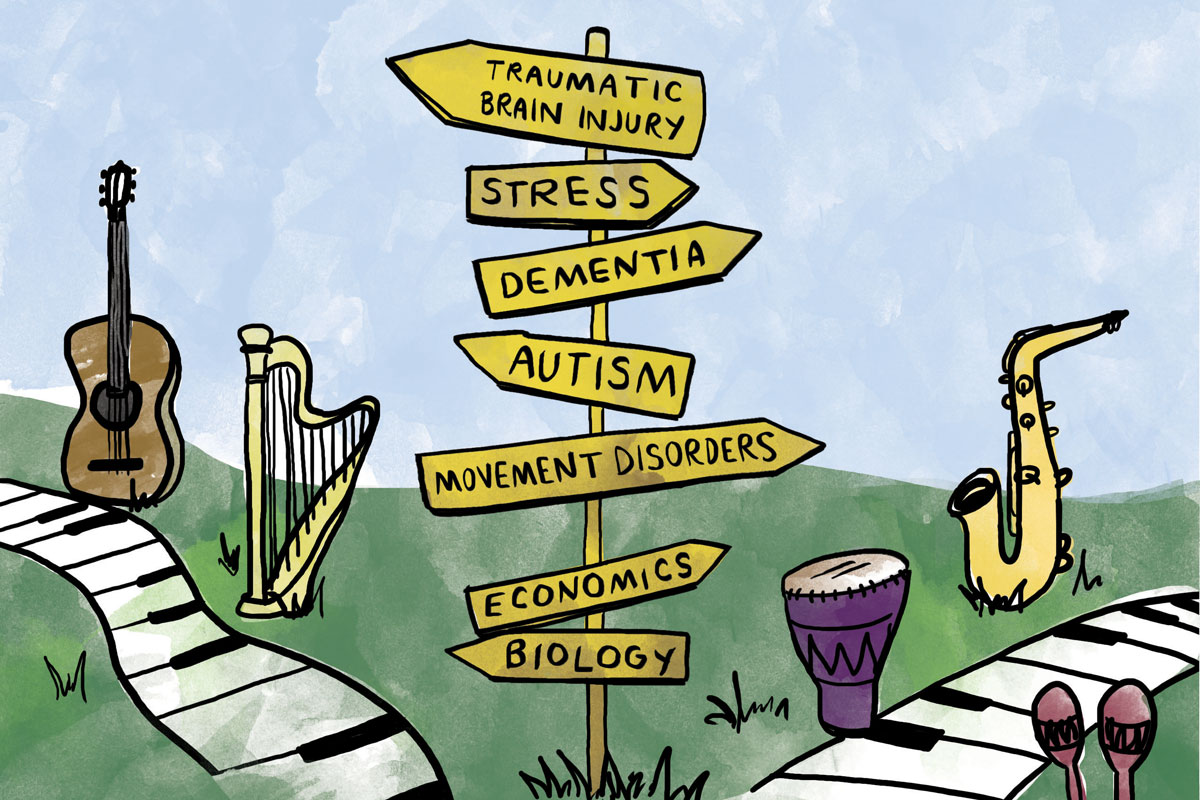 Music therapists use it to create a connection with their patients, often by performing music with them. They also can use music to help a patient regulate their mood: Therapist J.W. Burt found that music therapy involving improvisation on hand drums helped war veterans moderate their ‘often misdirected, exaggerated and unrecognised emotions’ and helped build a sense of connectedness and common purpose in the group. Music has even been known to help autistic people because the emotions they derive from music give them an idea of others’ emotional experiences and thus to feel increased empathy.

Sound processing begins in the brainstem, which also controls the rate of your heartbeat and respiration. This connection could explain why relaxing music may lower heart rate, breathing rate, and blood pressure and also seems to ease pain, stress, and anxiety. Patients with heart problems can often be helped by music which lowers their stress and anxiety and brings their heart rate and blood pressure down to healthier levels.

However, it should be said that for this to happen, the listener must like the music and have a taste for it. A soul music fan might not respond to classical music and vice versa, although Mozart does seem to be an exception to this rule and in most experiments his music seems to engender feelings of calm. Normally it seems to be the case, however, according to the American Music Therapy Association, that music ‘provokes responses due to the familiarity, predictability and feelings of security associated with it.’ You need to be familiar with its idiom for it to work its magic on you. 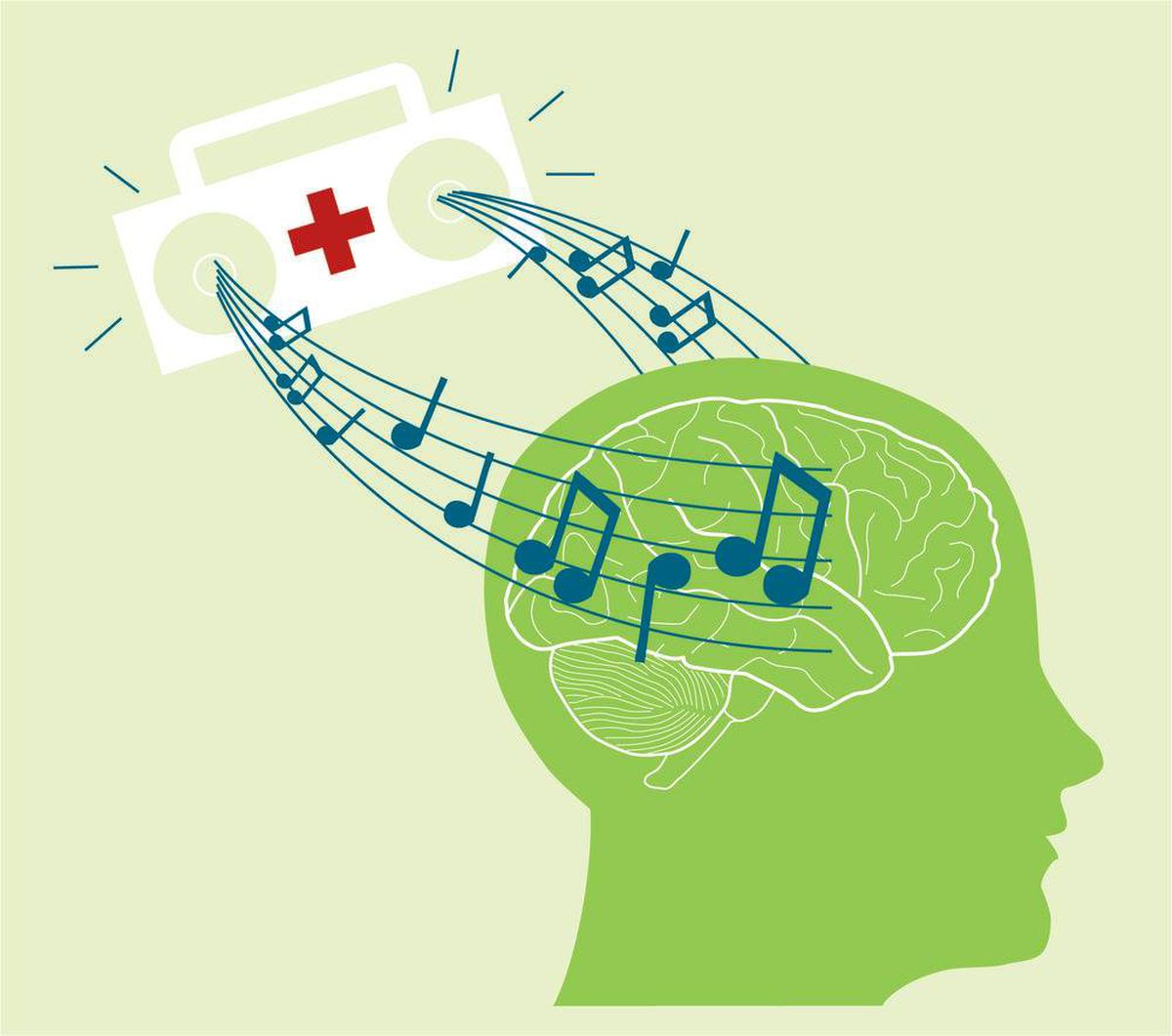 It should be stressed that what we are talking about here is no minor matter. In studies, scientists see music having significant physical effects on their patients. I can’t help thinking that if there were a drug invented that brought about all these changes and benefits to the brain, heart and blood pressure it would be marketed as a life-saver!

So what is going on?

In heart-brain studies, music is observed to bring about measurable physiological changes. It actually alters the brain in predictable ways. Composer-neuroscientist Michael Casey found that specific music features induced predictable activation patterns in regions of listeners’ brains to the extent that he could infer which musical work or genre a subject had been listening to simply by viewing the alteration in their brain!

The area known as the anterior insula is important in this process because it is connected to parts of the brain responsible for hearing (auditory cortices) and pleasure (dopamine reward system). These network pathways create expectations during listening which are either fulfilled or not and the fulfilment and non-fulfilment of predictions are thought to be what makes us find emotional meaning in music.

The reasons for humankind’s deep response to music can only be guessed at. We can hear music from quite early in the 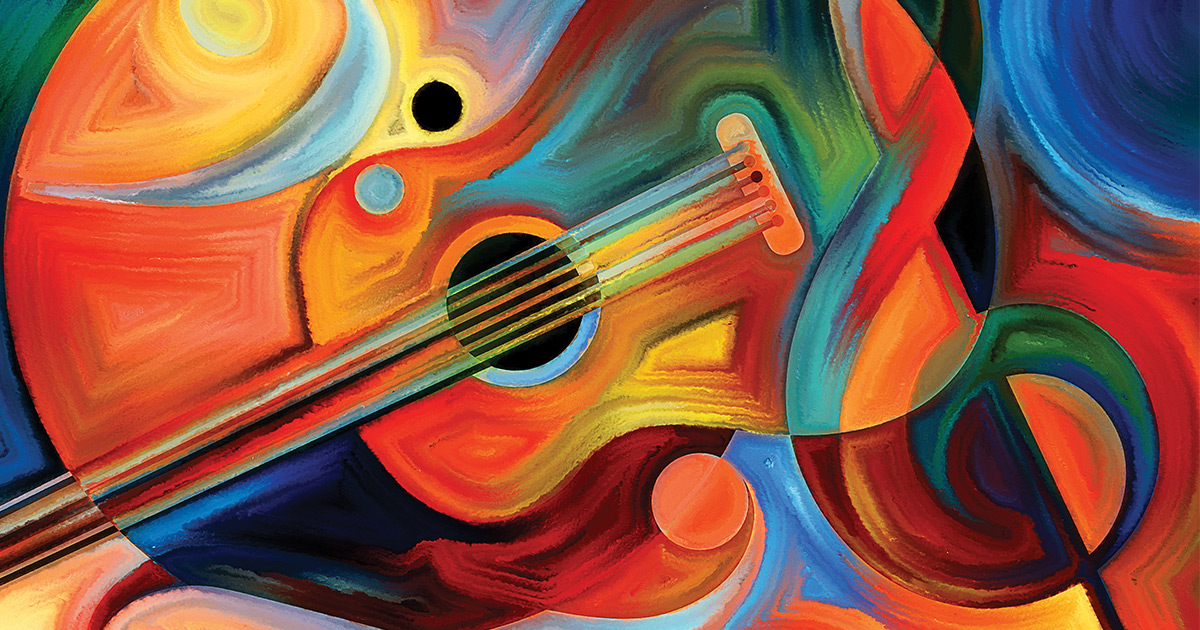 womb, so music is potentially with us throughout our lives and although in contemporary contexts it may not seem that music has much point, in fact it seems to have been a powerful factor in our evolution. Darwin hazarded that it was primarily a means of courtship but that theory has been rejected more recently in favour of theories about music promoting cohesion of the group and enabling primitive societies to create songs as mnemonics for remembering history and other important information. Before modern medicine, music would have been one of the best tools we had to keep us healthy and to lower stress. After all, to sing to a baby is the most universal and natural of human instincts.

Even if we have grown civilised beyond the evolutionary need for music, we still crave it and respond to it. To quote the great musicologist J A Sloboda, ‘Detached from its mundane origins, music can now serve as a vehicle for a whole range of aesthetic and transcendent experiences’. Music was an important advantage in humankind’s evolution, but it still has a vital part to play in our lives today.